Hey gang, we have a holiday in Thailand today – Macha Bucha Day. My two buddies here Bart and Ton and I went to Huahin of a day trip to kite…..and it was sa-weeeet. Wind – check, sun – check, good mood – check.

Since the last two posts were treating the darker side of the human existence, today just a few observations from the CIty of Angels – Bangkok that is.

A bike lane sign painted on the street. If you have been to Bangkok, you know that traffic here is chaotic, to be polite. But someone painted a pink bicycle with hearts on the street to indicate a bike lane. I can only love it, because I love biking. Interestingly, Bangkok has a pretty big single speed and fixie scene – quite cool.

Next s a dude who does what Thais do probably better than any other people I have visited or lived with – just going with the flow and taking it easy…..with a fan…..at one of the busiest intersections in Bangkok.

Alright, it’s 22:30 and I will hit the hay until the next entry, stay sharp and at least try to think about an unselfish deep you could do for someone else.

I would like to continue today by concluding the Cambodia trip with our visit to the Cheoung Ek Killing Fields just outside of Phnom Penh. The Red Khmer selected the location, due to its remoteness. The place is surrounded by agriculture and was back in the 70’s. This way, the sounds the eh atrocities made wouldn’t bother “the neighbors” or worse raise suspicion. No, this was a fine location for some thrifty genocide. Thrifty, because the wise leadership declared, that bullets were too valuable for killing the people in the camp. Instead, the leadership challenged the camp administration to save bullets and get creative t still get all the killing done. This led to some of the behaviors that are clear indications to me, that man is NOT the crown of creation. We may be the furthest evolved, but if evolution takes the wrong turn it clearly is nothing to be proud of or brag about. May be the planet should be run by dolphins, whales, eagles, finches, cheetahs, golden Labradors, sunflowers and palm trees – just a thought.

Cheoung Ek was used for systematic killing of anyone for any reason – think industrialized killing, similar to the German concentration camps under the National-Socialists between 1933 – 45.

The camp has 126 has graves. A few of tim were exhumed and the bones were stacked in a memorial stupa in the center often camp. During rainy season, the has graves release some of what thy keep. bones, teeth and pieces of cloth come to the surface freed by the rain water. What you see below is the undulating landscape left by some of the exhumed mass graves.

The Red Khmer, in their zeal, were no discerning killers. Man, woman, child, this on the list were killed. The direction was, that if a “traitor” was killed, to kill his entire family, in order t prevent revenge late on from the “traitor’s” family left behind. The camp administration got creative, to save bullets they tore babies and infants from their mothers and slammed them against the tree until the victims were dead. For good measure the parents were often forced to witness. I cannot begin to imagine the sheer horror. 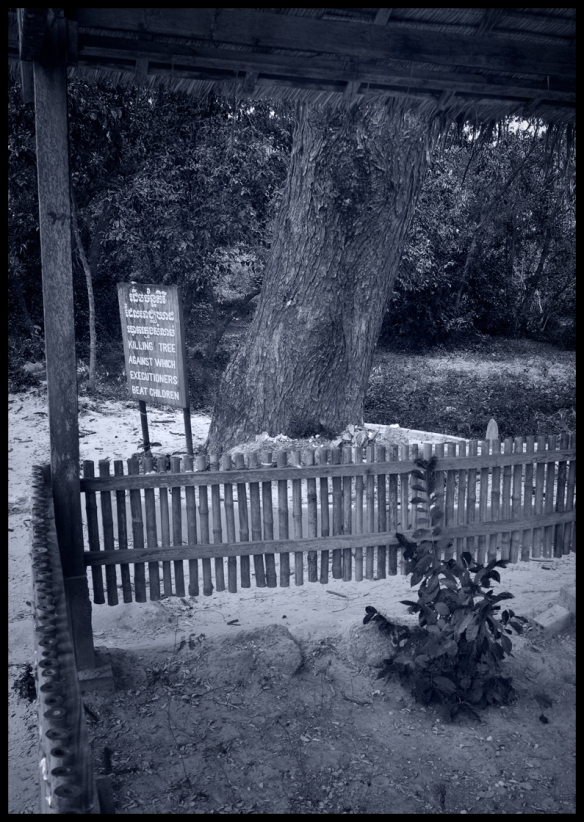 Today, the area around Cheoung Ek is inhabited and farmed by families with children. I am not sure if the families round the site comprehend where they life or if they have ever talked or ever will talk to their children about the neighborhood. But the children smiling were a stark contrast to the crimes committed here less than forty years ago. 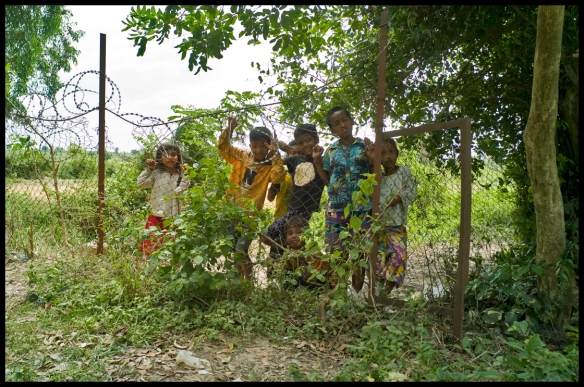 To close the chapter of the Red Khmer atrocities, take a look at the prisoner guideline at the Toul Sleng prison, I wrote about yesterday.

I will leave you with my take away from this trip. Whenever we travel we meet grab people – local people. Sure they have a clear incentive to be nice and polite, but my premise is that people are generally good. Humans are capable of great acts of kindness, completely unselfish. Human life centers around having to do something to get something. Think of something simple like eating. I can put food in front of a person, but if the person is unwilling to do something, like picking up the spoon and mooing food to his mouth, and chewing the food, the person is going to die. My current hypothesis of why history allays repeats itself with dictators, despots and cremes against humanity is because there are a few rotten individuals among us that are too lazy to pick up the spoon to eat. Thy spend all their energy once in their pathetic little life, to devise a plot to subdue a suffering people. They create a system that outwardly is for the benefit of the people, but makes them the only real beneficiary of everything. Their system is quickly revealed as self-serving – enter the scape-goat. The pattern is always the same: a few lazy – possibly educated individuals, a large desperate people (starvation, lacking education, a see of hopelessness and unemployment are a plus), a minority easily singled out to blame when the system designed to fail the people fails the people. The final ingredient grand promises of grand and fast improvements. Once the system has ben established and the populous has ben converted to brainless robots, the few individuals have achieved their life ambition – letting everyone else cater to their every need and little idolization may not be a bad thing either.

Contrast – I like contrast. I like the deep blacks and the bright whites connected with shades of gray in black and white photography. I like charcoal and pencil sketches. Contrast in art is great, but contrast in humans can be a beautiful thing, but also give insights into the most dark corner of the human mind. When these darkest corners rise to visibility, I am easily shocked and struck by a lack of comprehension. My tolerance threshold to be shocked is relatively low. On our trip to Cambodia two weeks ago, we traveled by boat from Siem Reap to Phnom Penh – if you seek adventure, do it. As in many Asian countries, Western safety standards don’t apply. The seats were crammed, so that I found myself quickly outside on deck. My cousin fried himself a bit due to the sun beaming don and a complete lack of shade.

After we arrived in PP, we took a TukTuk to our hotel, only to get to the road again to visit Tuol Sleng. Toul Sleng was a high school that the Red Khmer (Khmer Rouge) turned into the country’s premiere torture prison. You see, Cambodia was ruled by a handful of foreign educated dictatorial and absolute rulers  – most prominently Pol Pot – from 1975 to 1979, when the Vietnamese drove the Khmer Rouge into the border jungles between Thailand and Cambodia. The dictators tuned Cambodia into a peasant state, where education was undesired and was to be eradicated. They split the population into the working people, those that earned their living with primarily agriculture. The other class, were the city people, who were declared the source of all evil.

But let’s start with Tuol Sleng. Turning a school into a torture prison ends such a clear message where education stands as a priority – it was to be eliminated, forbidden; knowledge was bad. When you enter Tuol Sleng and you go through the class rooms converted into interrogation rooms the mood gets heavy and fear and desperation become palpable.

The prisoners were tied to the bed frame with U-shaped shackles around the wrists and the angles. The shackles were locked with the steel rod. The ammunition case was meant for the prisoners to defecate into. The artwork of the sun shining over the rolling hills can only have further taunted the prisoners. A few “rays of hope” in rusty metal formed to a naive landscape. To illustrate the business like conduct of these interrogation, the torturers had a desk to take notes, which they meticulously did.

Once this classroom taught children – possibly bored out of their mind – under the Khmer Rouge it served as a corral for beaten and tortured souls.

But not all classrooms were used for interrogation or has corrals, some were converted into many tiny cells, where a prisoner was waiting in darkness for further pain and humiliation or simply death.

The prison administration was very much aware of whet they were doing. They did it with great dedication. When prisoners started to throw themselves off the higher floors, the administration installed barbed wire fencing to prevent the prisoners to take control of their life for one last time.

I imagine that this must have ben one of the last views the prisoners saw after thy were released from their dark cells to be transferred to whatever was next.

I will leave you with these images and ask you to contemplate if man is rally the crown of creation. I know of no other species, that spends so much time devising ways to inflict pain and to degrade others and then seeing it through while claiming it necessary for some higher purpose. An why is it that there appear to be far more psychopath male despots than  female?