So here we area dreary, gray, drizzly, cold, partially foggy Sunday afternoon in Minneapolis. Instead of falling into a depression over our state of transition and the poor outside conditions, we decided to go to a coffee store for a cocoa and a muffin – would this be considered stress or depression eating?
Anyway, here we are. Yesterday we drove by a church nearby and they were in full swing with pumpkin sales from a decorative pumpkin patch. And because it was a church, there were no ghosts, ghouls, monsters to be seen for almost an entire city block. Three were pumpkins of every size and a few rag dolls. 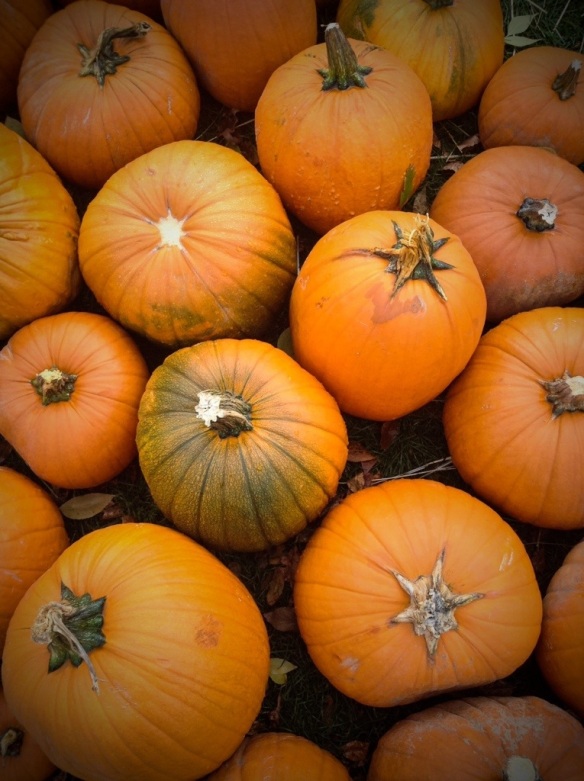 For your inspection pleasure: pumpkins grown in the US of A….in fact probably one of the last few things that have not been outsourced to a country on the other side of the planet that delivers at way lower labor costs and lower quality. 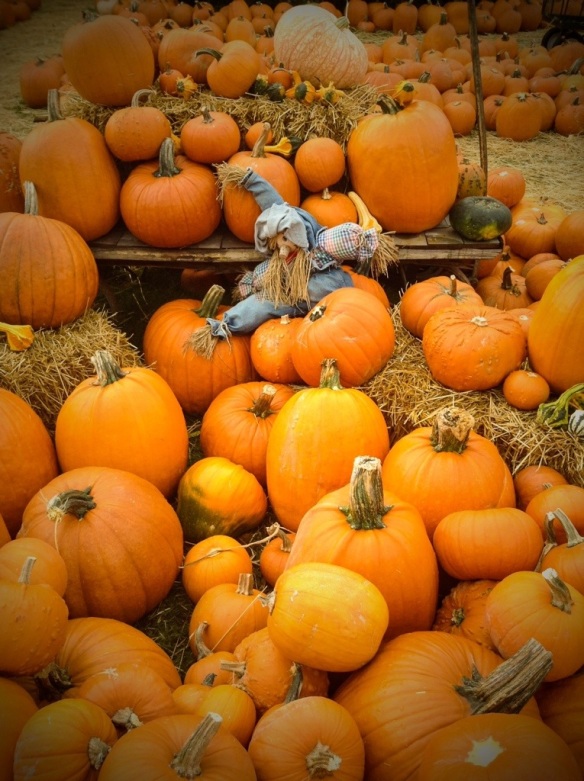 A rag doll ever so adorably placed in between the pumpkins, almost playing peek-a-boo. 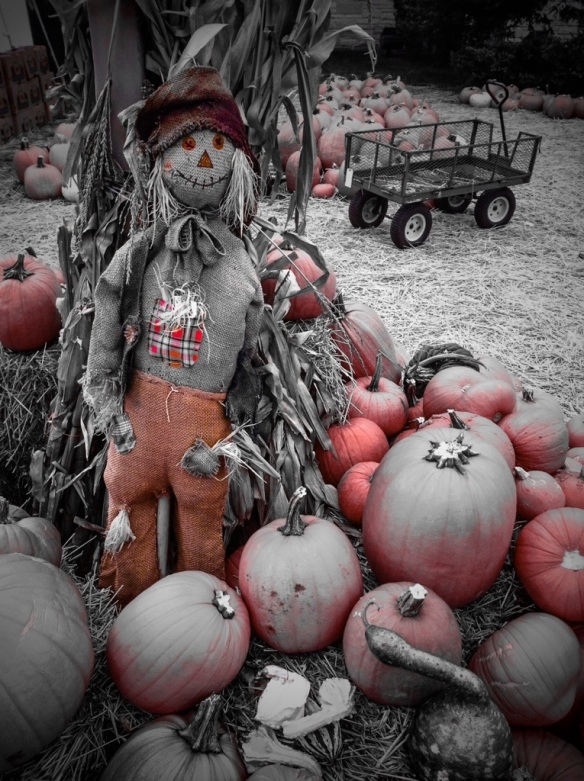 the most scary looking image from the church pumpkin patch.
I used to love the Helloween, because it started the clock to the year end count down:
– October 31: Helloween
– Last Thursday in November: Thanksgiving
– December 24: Christmas
All these holidays are four weeks apart. And usually around thanksgiving we got the first snow or at least lakes would freeze over. This meant playing ice-hockey, skating and cross-country skiing and of course the Winter He-Man run. This is a 5k run an Hyland lakes with a subsequent jump into Bush Lake with full submersion. There was no need to be worried about nudity, because there was no one else and the cold water causes a human body to retract anything that one may have been dangling….. like a frightened turtle.
But now it’s just dreary. I will demonstrate how cold it is. Take a look at these feet. 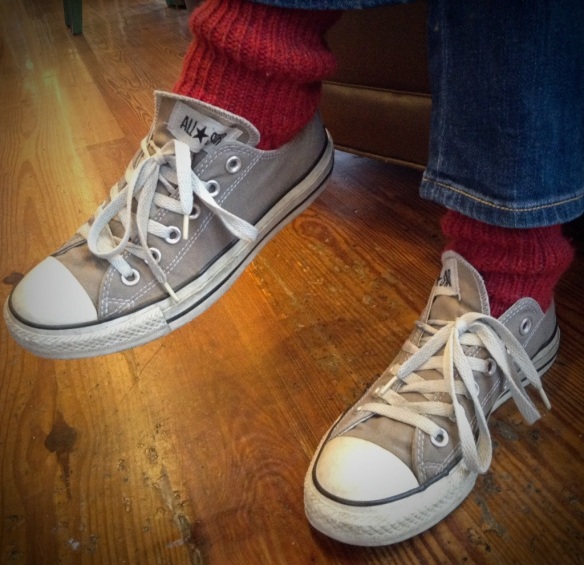 O.K., this may be the last entry from beautiful (usually, just not today) Minneapolis. More soon from the other side of the world.

It’s Fall in Minneapolis or as English people call – Autumn…English still call Minneapolis, Minneapolis. It’s the same in English and in ‘Merican. This closes our small excursion into language and cultural differences between ‘Merica and the former empire. So, we went for a walk in the beautiful Fall woods that are Hyland Hills. I spent many a lunch break there running and swimming in the Summer and cross country skiing in the Winter with many great friends and co-workers. I also learned there that ski jump landing hills and downhill skiing slopes make for great running in the Summer. I remember when in 2001 I had to stuff my own lung back down my throat after Adam had convinced me that it’s good idea (most outstanding training effect) to run up the landing hill of the Bloomington ski jump- the nation’s biggest ski jump between Lake Placid, NY in the East and Salt Lake City, UT in the West. Once the lung was back in my chest, I was able to see in color again, I felt extremely manly.
And now we are here at this place that holds so many lovely and often very funny memories. 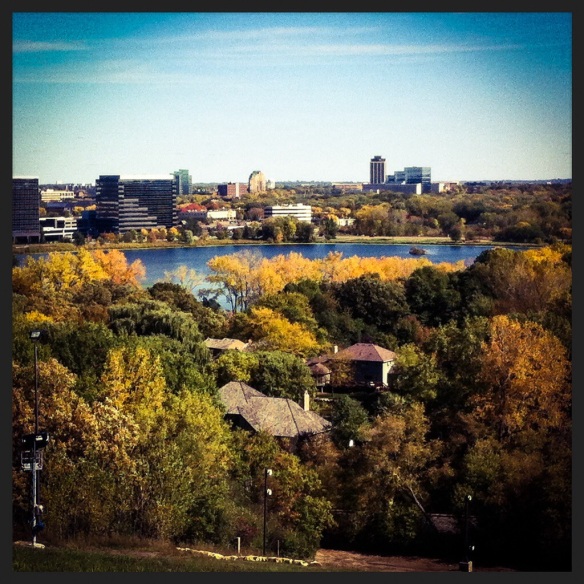 the view from the Hyland ski hills towards Bloomington, Edina and Richfield. In the Summer the hills are officially a driving range for people that enjoy hitting small balls with expensive sticks they call clubs. But the true sportsman and connoisseur runs these hills up and down until one’s field of vision closes in like in a French art movie as the word “fin” in cursive writing fades in. 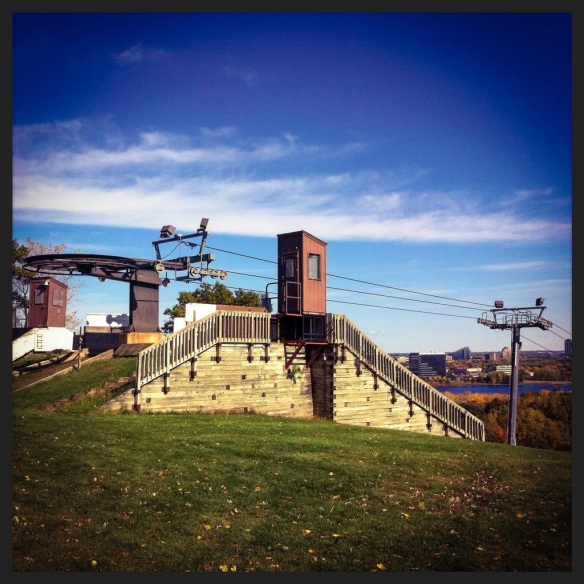 To prove it is indeed a Ski and Snowboard area, I am showing you one of the 4 lift stations that drag that passionate Midwestern skiers up to the top of the 2400in (200ft sounds less high and a bit whimpy) high hills. 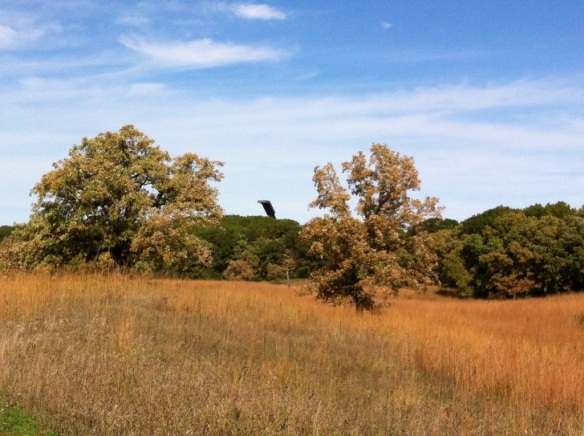 And there she is, the bringer of pain, the separator of boys and men, the ski jump seen from the back. 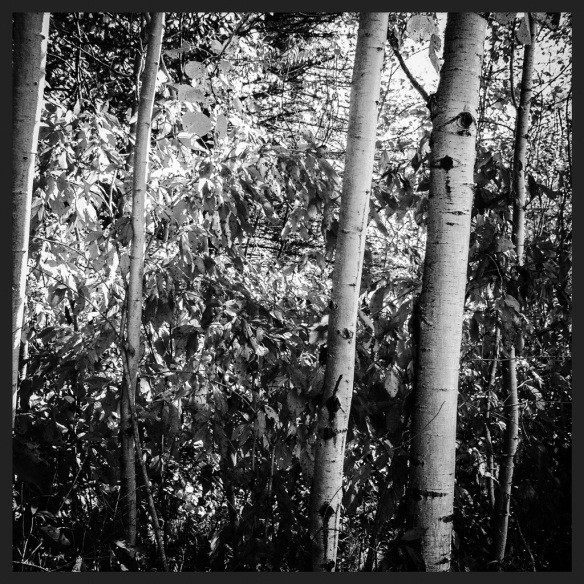 By law any photographer must only photograph Aspens and Birches in black and white – this is mandatory regardless of season – so there you have it.
But seriously, Minnesota in the fall is great. All the leaf color one could ever want and it’s the best time for mountain biking in one of the many excellent parks or for a nice long fall run on soft forest ground.

Stay sharp and use the opportunities in the great outdoors around you.

Ever since I graduated and got my first job my wife and me have lived in Minneapolis, Minnesota. I am pretty sure that the majority of the US readers don’t really know where exactly Minneapolis is in America. It is in the beautiful state of Minnesota, which borders on Canada. In an East-West direction , Minneapolis is almost perfectly between the East and West coast – Vermont and Washington.
Minneapolis is a hidden gem. The city’s most widely known claim to fame is the Mall of America. But it is also the only city no know of where you have a fabulous cross-country ski race weekend that culminates with the City Of Lakes Loppet with a finish line in Uptown Minneapolis. If NYC wanted to pull the same stunt, the finish line would have to be on 5th Avenue.
Minneapolis has a flourishing art and creative scene, thanks to the conversion of former warehouses – from when the grain exchange was still in Minneapolis – to artist studios. There are many museums, theaters and concerts from the three tenors to Metallica.
Yes, it gets cold in the Winter and yes people will use talking about the weather to you as an ice-breaker, but Winter in Minneapolis or Minnesota and it’s little sibling state Wisconsin is also magical and beautiful. Winter here means cold and sunshine. If there is no sun it will snow. Cold, sun and snow make for excellent outdoor activities. There are tons of cross country ski trails that will make the skier forget about the cold quickly. There are mountain bike trails open in the winter for this with cross bikes or Pugsleys. And there are literally shitloads of hockey rinks and ice sheets for ice skating. All this makes Minneapolis to me the best city to live in in America.
In the Summer, Minneapolis has lots of trails for running and roller skating around the many city lakes. In the greater Metro area there are also many excellent mountain bike trails. You don’t get the altitude and climbs like in Colorado, but the single tracks here have many other features such as obstacles and right banked turns to make up for that. In the Summer my friends and. I would run and swim or ride the bike over lunch, while in ten Winter we’d put on our cross country skis for a quick few kilometers. On Summer evenings the lakes and the greenway are filled with bicyclists and inline skaters. And then there are the people – Mid Westerners have a reputation to be a little passive aggressive, which can drive people insane. But, this is just because they are actually nice people who don’t want to just slap everyone they meet upside the head. Pretty much all of the people I met and got to know we’re perfectly able to put me in my place (in the very few instances that was possibly required), but they were also there when I needed them no questions asked. Minnesotans are very hands-on, everyone builds always something there is always sawdust in someone’s garage or or grease under the fingernails.
But now let me show you what Minneapolis looks like better the area that I call home. 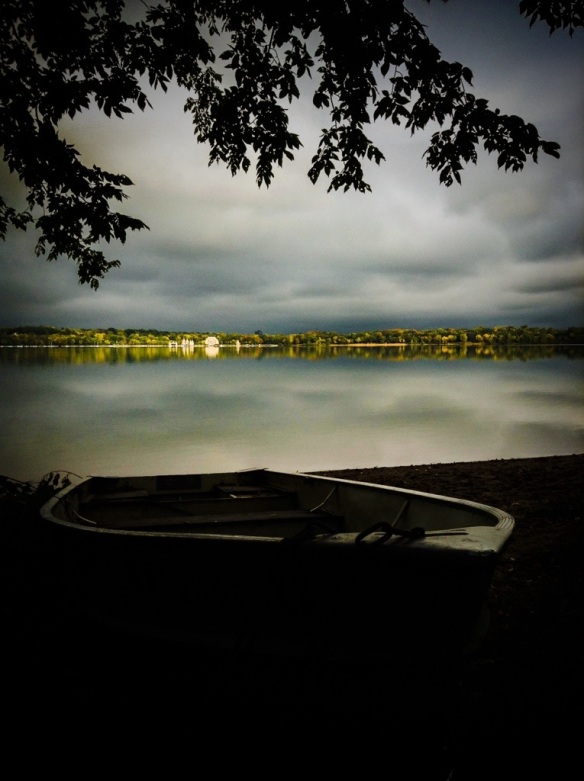 The Lake Harriet bandshell, where there is a Summer free concert series every year. The city of Minneapolis is also offering sailing classes here. 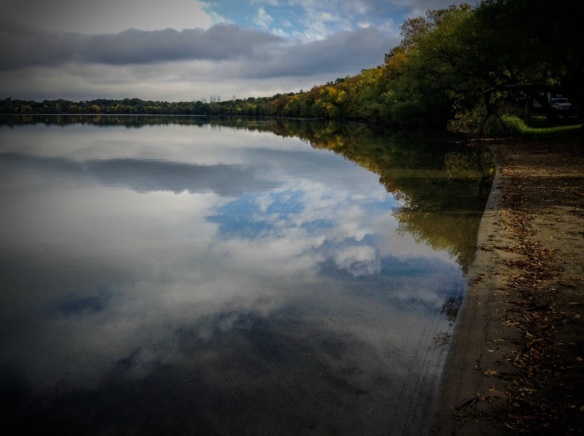 The view down the eastern shore of Lake Harriet. around the Lake is a great bike and walking/running path. 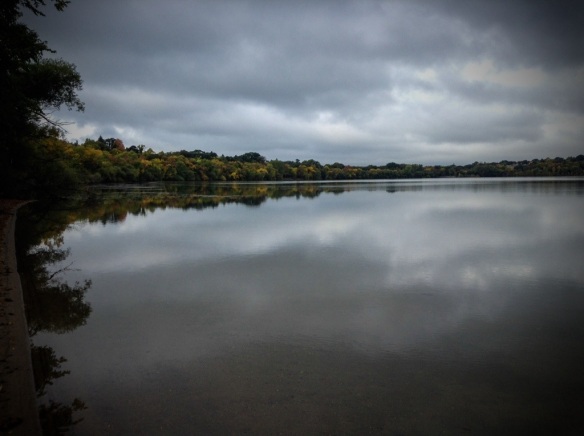 The view towards the Western shore of Lake Harriet. the road the goes around. Lake Harriet is always part of any of the many 5k running races around the like. The Southern and Eastern part of the road has three hills in it, that my friend Adam and I refer to as the three ugly Queen, because the make a fast 5k just a tad more uncomfortable.

in the fall the lakes gets too cold to swim in, but it’s not too cold for a quick post run dip to cool down – after all there could even be a lifeguard on duty.
Finally, the view of the northern shore of Lake Harriet with the Lake Harriet bandshell on the left and the skyscrapers of Downtown on the right. 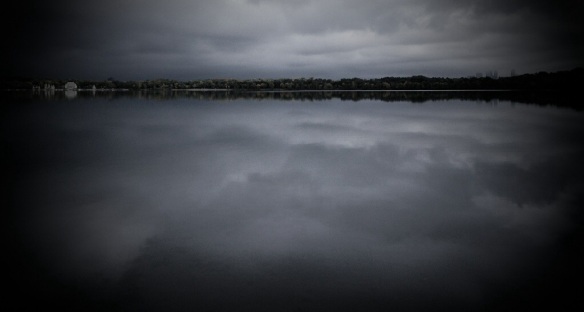 As an added bonus, I want to show the Eastern and Western shore of Lake. Harriet in black and white and the city still looks great, even with a lack of color. 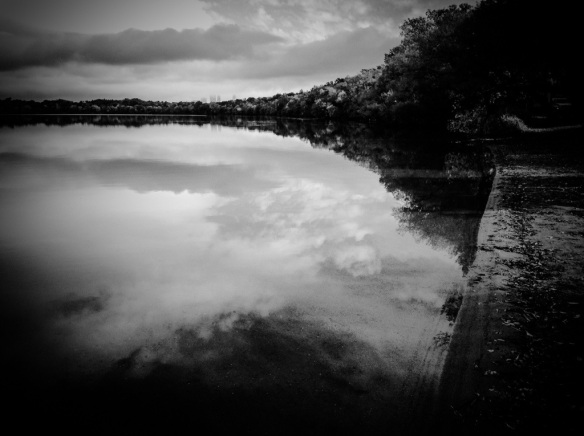 Eastern shore of Lake Harriet in B/W with just a few shades of grey. 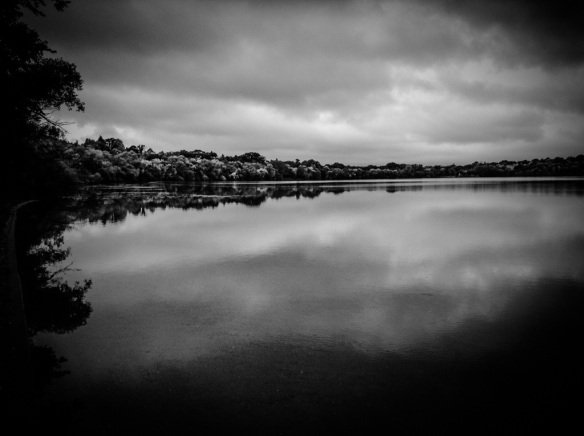 Same thing for the Western shore of Lake Harriet.

I love this city, it’s where home is and where it was.