Now, Morocco, I suppose has different attitude towards what I call Wall Art, gratifies and stenciling are not yet wide-spread. But if you keep both eyes wide open, you can catch it.

Alright, I know this is very much clichée. “A Skateboard, Markus, really?!”, Yes a skateboard. We did not see any skaters while in Morocco, but, hey it’s the intention that counts, right….expanded Olympic Spirit, people.

To collect the images for this entry, I had to cast a wider net for the picture, be a little more inclusive, lower the bar slightly for entry. Spain by contrast has been exposed to Western Urban Life a lot longer and thus “Wall Art” is more accepted and has become part of the art understanding. In Morocco, not quite so much , yet. But, as you will see, they’ll get there, too. 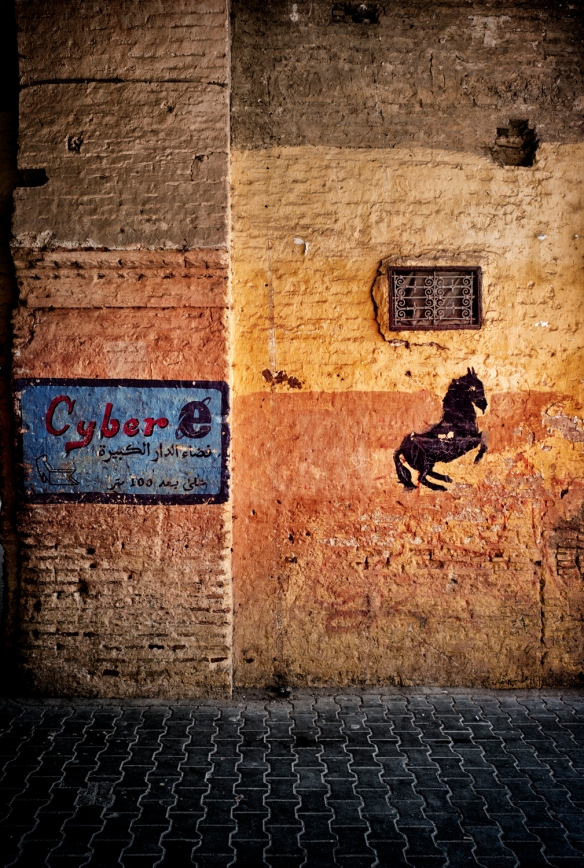 These are actual paintings on house walls. These used to be inside walls (where antiauthoritarian parents reminded their children gently….very gently to use their “inside voice”).

This is a handprinted advertisement for a tea shop, that also feature orange juice. Apparently one must also not part inferno too this wall. The other stuff might actually say:”Markus Is An Idiot”, I haven idea, I cannot read Arabic, I can speak a bit. I can make people hurry up in Arabic and I can say “Hello”, and I can say:”The next stop is…” – no reading though.

Behind this door are the official scald of the leather market in Fez. These scales have been behind tis ancient wooden door for over 2000 years – I made that all up, but some of you were gasping impressedly. No, I just saw the scales, but what I really needed was a reason to take a picture of what looks like a butt sitting on a very uncomfortable rock – I do not get that picture. Someone put effort into it and painted it, however.

Clearly, this is a handprinted sign for a hair dresser. One must hope that hair dressing is the person’s true calling, because most people, I surmise, would not want to have the equivalent haircut of this painting.

Now we are entering Chefchaouen, in the Rif mountains. This place is one of my favorite villages in the world. Why? Because it is very very soothing and relaxing. The entire Medina in the city is painted in shades of blue and white. Apparently, someone is selling onions. Or maybe the onion to the right is code for weed, because there were sweet Mary Jane field just outside the city. people would go on these easy half day hikes outside the city and come back oh-so-mellow and laid back.

Look at this, here “Wall Art” is all around, the whole city is Wall Art – very cool place. 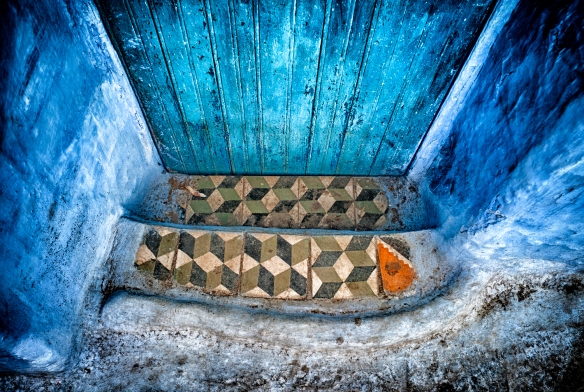 Heck even house entries are special. The white and blue mixed with an “M.C.Escher-esque” tile mosaic. 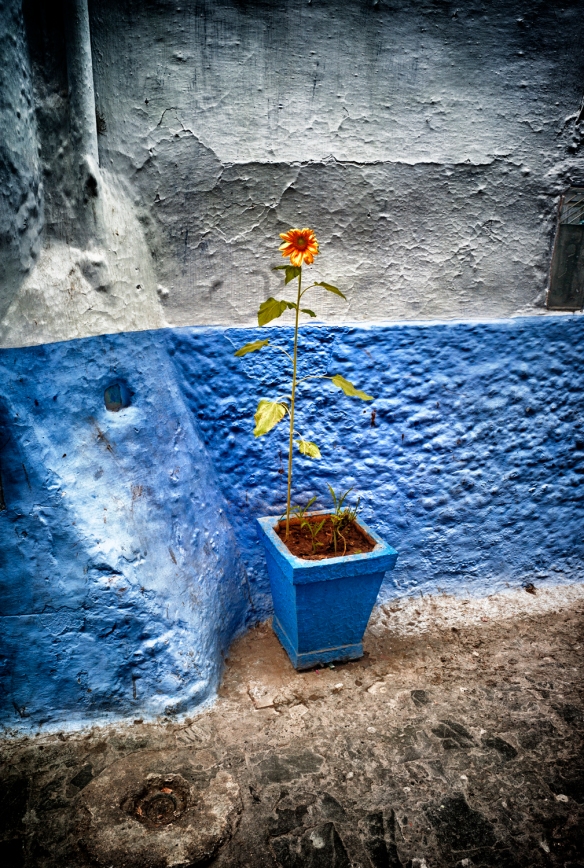 Ane even though there is no painting pr se, I still had to include this lonely, yet proud Sunflower in its blue pot.

And now it is time for me to go to bed, so I am sharp again tomorrow.

Sayonara readership and you, too, stay sharp.

I was browsing through my photographic inventory, where I stumbled upon images of a cool trip Barbara made go on to. In the Fall a few years ago, life handed us some extended time off. So we decided to go to the south of Spain and the north of Marocco – I had’t been to either. When looked at the images from Spain, I rediscovered, tat I had been impressed by all the public art in Granada, Cordoba, Seville and Madrid. These painting ranged fro original graffities created under cover of moonless nights through deliberate paintings commissioned by shop owners to project the mood and feel of the shop. So, without further ado, we go.

How cool is the mural on the side of a street cafe? Life starts later in Spain, because I shot this at around 9:00 in the morning and the city was still VERY quiet. Yet, the painting is great with strong colors conveying dynamic. 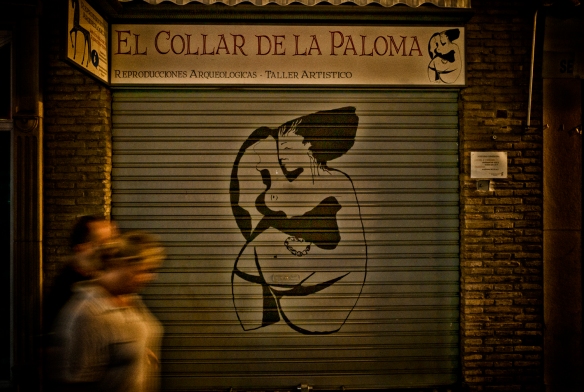 Hmm, interestingly this store was already closed when i took this image – early evening. Well, it’s only fair. When you start late you need to make it up by closing earlier – it’s common sense, dammit. The image, looks to me like a chubby skimpily dressed lady…well she seems to be confident. And who doesn’t like a confident woman.

Then there as this stenciled spray art. They reminded me of Laurel and Hardy. I have to say, I admire artist who can create stencils and make expressive art with only very few colors.

Same thing with this stencil painting. Here apparently they stenciled over a turquoise thing, that either was not very good or never got finished. Anyway, it works for me.

This is the other wall bonding the outside seating area of the cafe form the first image – Señora Amelia. Very life-like, the face seems to have experienced a lot. 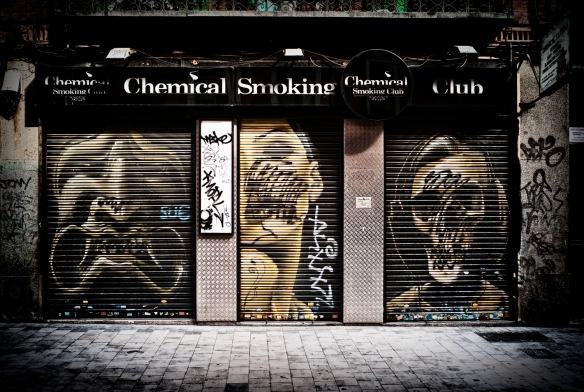 In Madrid, we saw this shop – of course closed, it was only abbots 11:00 in the morning. A Smoker’s lounge. However, I wonder what the Chemical is the Smoking Club might mean. As far as i know weed and anything else north thereof is illegal in Spain. So I suppose they just went with a cool sounding name, but it stops at Cohibas. Anyway, it is bad-ass. Come to think of it – I was bad-ass. Now it’s just a T-shirt graphic. The new bad-ass is the photos of all the illnesses caused by smoking on the packs – gross.

Part one of a flaking-off painting on a Flamenco Club – love it, though. 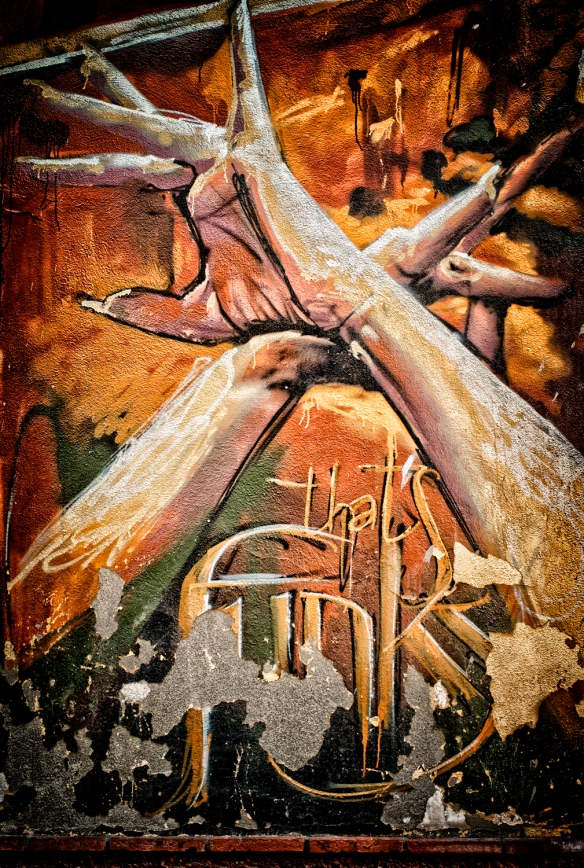 And here is part two – I love it when an artist possesses the ability to capture the essence of something with a simple gesture – the is enviable to me. The crossed wrists and the elegantly spread fingers….so much grace. 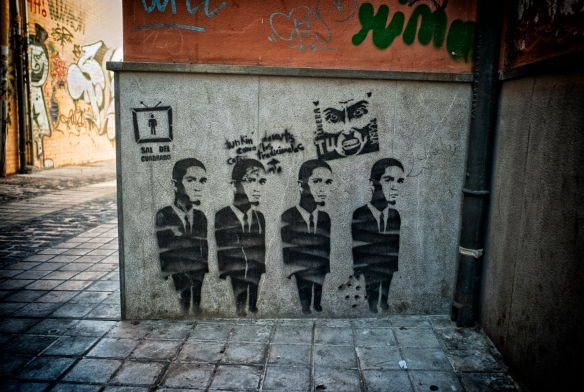 When I first saw this stencil painting, I felt reminded of a young Barack Obama, then an unknown rapper. But when I look at it now, he looks like Trevor Noah, the new host of the Daily Show. I am curious what memories the image of this guy triggers for you.

This mural I love, because it is so beautifully surreal. If you click on the photo to see it larger, you will recognize how much is going on in the cross section of a head. And in all honesty, that only barely scratches the surface of what really going on in a true man’s head.

A SheDevil – often the things that are most tempting will only bring destruction to a person’s life. Look, I will be honest. I love chocolate, but I know that it is NOT GOOD FOR ME! Thus, I do this abstinence numbers every once in a while until I can’t manage the craving anymore and then……I…..think…Baseball,…. ice-cubes,….football to the groin,……chalk squeaking on black board – because I am a fu#$%ng rational person in control all…..and everyone of the voice in my head agree all with me,

Here we can go deep into interpretation land. What is the message of this stencil? Literally, I appears to promote a dialog between brain and the heart. Henri Cartier Breton once said, that photography is the perfect alignment of one’s eye, the brain, heart, camera and event to be captured. This would fit, too. Go, ponder this over a nice cup of hot chocolate and a good butter cookie.

This mural speaks to me because of the context it is in. The place was shuttered, the wall the painting is on, is closing what I surmise must have been an entrance. The face is sleeping. There are signs all over setting boundaries, which no one cares for. It displays a certain sleepiness and hopelessness, which is in contrast to the fresh and vivacious yellow of the building wall.

Then of course we have to have an image of something that is borderline to vandalism. Hm, if Señor Ramirez feels generous as the owner of these blinds, he might think:”Well everyone must to start some time some where.” Of course, such generosity must blanket the underlying question:”Dios Mio, why the hell my store? Why not somewhere else first and then you come back when you are good, preferably desirable and recognized. Pendejo”

Our closer is the garage door of a tattoo shop in Madrid – nuff said.

I think this is pretty much it. Stay sharp readership. A note to my American readership:”Trump, really?”.